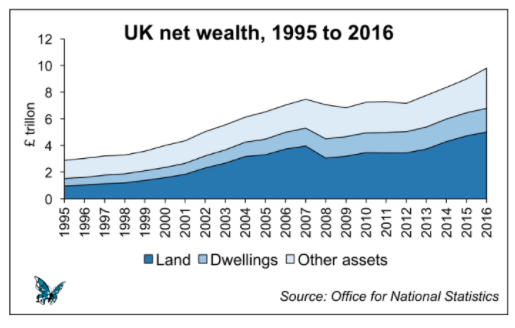 One of the basic claims of capitalism is that people are rewarded in line with their effort and productivity. Another is that the economy is not a zero-sum game. The beauty of a capitalist economy, we are told, is that people who work hard can get rich without making others poorer.

In a surprising twist though, data from UK says that 2/3rds of all wealth created in the last 2 decades is attributable to land and dwellings. Furthermore, and this is the crux of the findings, the creation of this wealth has come straight out of the pockets of those who don’t own property!

The past few decades have spawned a one-off transfer of wealth that is unlikely to be repeated. While the main beneficiaries of this have been the older generations, eventually this will be passed on to the next generation via inheritance or transfer. Already the ‘Bank of Mum and Dad’ has become the ninth biggest mortgage lender. The ultimate result is not just a growing intergenerational divide, but an entrenched class divide between those who own property (or have a claim to it), and those who do not.

Britain’s housing crisis is a complicated mess. Fixing it requires a long-term plan and a bold new approach to policy. But in the meantime let’s start calling it what it really is: the largest transfer of wealth in living memory.